Ok, so I bought the Orange Box, which includes a free copy of HL2, and HL2 episode 1.  And since Valve is awesome, and I had already bought those games, they let me gift them to someone else...

Hey, if anyone else had a lot of trouble understanding the details of the whole Sub-Prime Mortgage / Credit Crisis, I highly recommend listening to this week's This American Life.

This link will be good for a week or so...  If the link is broken, send me an e-mail, and I'll send you a copy.

Someone brought in some old halloween candy to the office.  I had one of those fun size skittles packets.  It had exactly 3 skittles in it.  It was awesome.

Also, I had a Dark Chocolate Mint 3 Musketeers...  totally awesome.  It's like a peppermint patty that's less obnoxiously minty.  And the dark chocolate is actually pretty good.

I know, after 6 months of no posts, this is totally what you were expecting of me.

Ok, it's not that bad....  but I've become addicted to Lord of the Rings online...  it's like WoW, but it's set in the LotR universe, the graphics are better, and it's not quite so grind-obsessed.  There are many other differences / improvements, and I'd be happy to talk about them with anyone who wants to know more...  Anyway, I've been playing it for quite a while now, and I'm simultaneously going to try and do two contradictory things.  I'm going to try and cut back my playing time to a more reasonable level (I've been playing it a lot lately), while I also try and recruit you (yes, you!) to join me in playing.

So yeah, Who wants to play?  there's a free one-week trial that you can download online from http://trial.lotro.com, and I have a few "buddy keys" that I can give which give you a two week trial.  If you're interested, let me know, because if you use me as a referral, you can get the discounted pricing that I get because I played in the beta ($10 per month instead of $15).

So, the last 10 days have been a really good for the foodie in me. (also, dov and my frisbee team has been on a roll in the playoffs.. 3-1 so far). So, here's the restaurants I've been to this week:

Szechuan Tasty House (902 Arch St)
We were going to go to The Lakeside Deli for (IMO) the best dim sum in the city, but we got there, and sadly they were on vacation. So instead we went to the Tasty House, which is a whole in the wall next to a tatoo parlor. Surprisingly nice decor on the inside, it feels clean and comfy and not at all shady. Most of the people there are asian (which is always a good sign).  They have a reputation for being the best authentic szechuan food in philadelphia.

We ordered three things...  Golden Coins, Seafood Hotpot and Buddha's Delight.  The Coins, are slices of eggplant, with a dollop of ground pork mixture on top, perfectly breaded and fried, served with a sauce similar to what's served with dumplings.  Absolutely amazing.  They were light and flavorful, fried to perfection, but not at all oily.  If you go there, definitely order them.  The buddha's delight was pretty disappointing...  the tofu was crap, and the veggies were well cooked, but desperately needed salt.  The Sauce was very salty, but since it served on the side, rather than cooked onto the veggies, it just didn't work.  Bad.  The Seafood Hotpot was quite good though.   It came out in a scaldingly hot stoneware bowl that kept everything bubbling for a solid 5 minutes.  Lots of scallops and shrimp, good veggies, and a nice spicy fishy sauce.  There could have been more octopus and I really coudl have done without the mock crab legs that they put in.  Still, quite good.  All in all, a good meal, on the cheap.  I'll be going back, but it's still only 5th or so on my favorite chinatown restaurant list.

Bridget Foy's (200 South St)
Sunday brunch....  Is there anything better?  So, I went here because I saw a blog post boasting that this was the best stuffed french toast in the city.  I was skeptical that anything can top the farmers cheese and banana stuffed french toast with vanilla bean maple syrup at Sabrina's Cafe. So we went...  We split a Pear and Goat cheese salad with pecans, which was lovely.  The pecans were candied, and the goat cheese was plentiful.  Then I had their French Toast, stuffed with apples, banana, and dried cherries, and topped with an orange butter.  It also had some sort of crisp coffee cake type topping on the top side of the toast.  It was quite good, but I found it too busy.  Definitely delicious, but I prefer the simplicity of Sabrina's version.  Alli had the blueberry pancakes, which were golden, light, and fluffy.  The Sausage that came with the pancakes were amazing too.  I think overall, I'd put Bridget Foy's brunch as better than Rx (whose brunch I also love) but still not up to the level of Sabrina's.

Hill Country (30 W 26th St, Manhattan, NY)
We went here with my family for my older brother's birthday.  It's an experience...  They have two counters where you order your food and bus it on tray's.  A main dish counter, and a side dish/dessert counter.  The Meats are sold by the pound, and you can order as much or as little of whatever you want.  The side dishes came in 3 sizes, and were varied.  All in all, it was a mixed bag.  The brisket was good, but not exceptional, and was almost cold by the time I got to sit down and eat it.  The sausage was quite good, but a little tough.  The Beef ribs were good, but oddly, not as good as the beef short ribs, which were decidedly smokier and more flavorful.  The pork ribs were tasty, but I've made better ribs on my own.  The sides were quite good though.  The cornbread was sweet and crumbly, with a solid crunchy crust, the corn pudding was amazing, as was the red cabbage slaw which had pears and dried cherries in it.  Honestly, not sure if I would go back, but it was definitely a fun time.

I had an awesome weekend last weekend. Actually, it was a weekend of birthday parties. I had Ali's birthday friday night (Flickr Facebook) which was awesome. Saturday we shopped for my Birtday BBQ on sunday (Flickr Facebook), and did a bunch of gardening to get the backyard to a state where people could hang out back there. Got insanely dirty (see pic below). Saturday night we went to Jody's birthday party at her apt, which was fun. 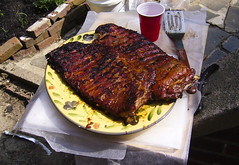 Sunday was the BBQ, which was amazing. I started cooking around 10am, making bbq sauce and smoking a rack of ribs (see above)). The ribs were fucking amazing... maple bourbon BBQ sauce after brining them in a maple brine. I'll put the recipe's after the cut at the bottom. I also ground my own meat for the first time for the burgers. We had herbed beef burgers and super garliccy pork burgers. Both were great, but I have to say, I was very impressed with the pork ones. They were amazing. All told, we went through 27 pounds of meat, and 1/4 keg of yuengling. Lots of people came (which is always gratifying... incidentally, thanks to all who came, and to those who didn't, maybe next time?).

Remember kids, freshly fried underwear can scald you! Always cool your underwear after frying them.

Went out drinking last night with Avi, Lesley, and Whitey. We had a good old fun time, and with a little prodding, I decided to go see the Rosebuds down in Northern Liberties / Fishtown at a bar called Johnny Brenda's.

The second opener was a band called the Bowerbirds, who were fucking awesome. I'd never heard them before, but I'm glad I did. The band consisted of a Nylon Stringed Guitar, an Accordian, and a Fiddle. The Accordian player and the fiddle player would sometimes put down their normal instrument and play a bass drum. And all three sang. They remind me a little bit of the Dirty Three, in that they get a very full sound from very few instruments, and non-traditional instruments at that. They reminded me of a lazy summer sunday afternoon. I wish they had been playing in the park or somewhere outdoors instead of a bar. Oh well.

Take a listen if you want. It's all good, but I'm particularly a fan of "Blur Oak" and "In Our Talons".


Then The Rosebuds came out. Holy crap! Totally amazing. I love their music on record, but in person, it's another story entirely. Their enthusiasm is infectious. In person, they "kick it up a notch" from the album, and I can't exactly place why. I think the studio mix is too tight. Everything is too controlled, too perfectly synchronized. In person, the music takes on a life of it's own. It plays with you, makes you want to dance, makes you want to sing along. And it's obvious they're having a great time playing it for you. They have a great rapport with the crowd, and tell fun little stories from the road. Anyways, you should give them a listen...